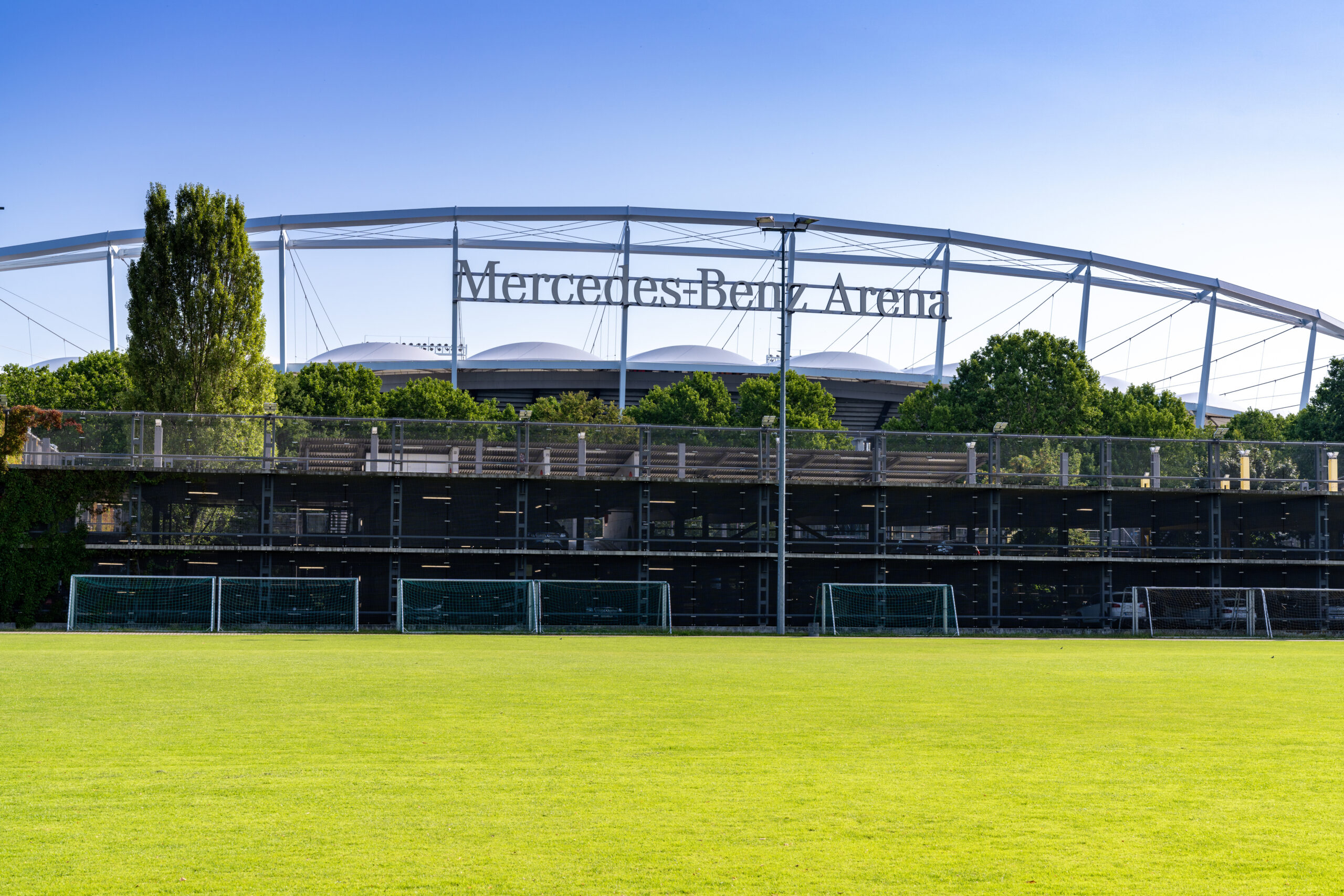 What does a Bundesliga football academy look like today, in 2020? A peek into the VfB Stuttgart academy.

Young talent is our future. German football only realised this after a very disappointing performance in the 2000 European Football Championship. By 2002, €500 Million were invested in reconstructing the Bundesliga’s youth development system. The strict change of rules forces all 36 licensed first and second league teams to run youth academies. If the club fails to operate a youth academy it will lose its licence, making it unable to play in the top Bundesliga divisions. Today, in addition to the 36 first and second league clubs, ten clubs in the third division and nine clubs in the regional leagues run a recognised youth academy. Besides training the boys athletically, the academies act as a home away from home, which is especially beneficial to the youngest talents.

Stuttgart, the city where Mercedes-Benz and Porsche originate, is located in southern Germany in the federal state of Baden-Württemberg. The city’s biggest football club is VfB Stuttgart, playing in the second division of the Bundesliga this season. VfB Stuttgart represents sustainable successful youth work. Currently, more than 100 players, who have been trained for more than three years in the club’s youth teams, are active in Europe’s top professional leagues. Players such as Sami Khedira, Mario Gomez, Antonio Rüdiger, Joshua Kimmich, Timo Werner, and Serge Gnabry are some elite world-class players from the region and players who compete in the major European competitions. Even Arsenal first-team goalkeeper Bernd Leno came from Stuttgart’s academy.

Today, the ‘Nachwuchsleistungzentrum’ (youth academy) is run by Rainer Mutschler, a man who has been involved with a wide variety sports for many years. In 1988, he was the head coach of the German Ski Association. From 2000 to 2017, Mutschler worked as the managing director of VfB Marketing GmbH and sat on the club’s extended board. He worked at the Mercedes-Benz Stadium for 17 successful years and helped the club to achieve high marketing success. After his time in football, Mutschler moved on to the German Ice Hockey League, where he was head of marketing and sponsoring at the second division club Towerstars Ravensburg. He returned to Stuttgart in 2019 at the request of the club’s advisory board, which wanted Mutschler to become a member of the executive committee. But things turned out differently: the 60-year-old became head of the VfB’s youth performance centre at the request of former German national team player Thomas Hitzelsperger.

The so-called Extended Talent Promotional Programme that makes all professional football clubs in Germany run a recognised youth academy also introduced another new rule in 2002: all academies of the 36 first and second division teams must ensure that at any time at least 12 boys in their squad are eligible to play for the German national team. The scheme is kept in place with €80 Million invested annually and has ensured that approximately two-thirds of all Bundesliga youth players would be able to play for the German national team.

In accordance with this rule, Mutschler says that “as a youth talent academy, [VfB] essentially concentrate on domestic talent, and in younger age groups on ‘only’ local and regional talent”. The younger age groups he is referring to are the under 11’s to under 16’s. The club believes these young players should not be centralised at such a young age. This means removing them from their families and asking them to move across the country. “Another reason we only concentrate on regional talent in the youth teams is that we are convinced that we have enough talent from the metropolitan region of Stuttgart/Middle Neckar. We only consider international talents in the performance and transition area [U17-U21],” Mutschler says. The step to scout for international talents is taken if not enough exceptional players have been raised in VfB’s own younger age groups. This, however, rarely occurs.

The main language of the schools the boys attend is German. Seeing as the majority of VfB talents at the youth academy are domestic talents, translating is not a problem for Rainer Mutschler and his team. “German is our youth academy language. Translators are not necessary for the junior sector; this is only practised in the first phase in the professional sector for new foreign engagements who don’t have any knowledge of German. English is always an option as well, but we prefer keeping everything in German”.

There are so many young boys who want to make it to the professional level. In a youth academy, it is the staff’s job to find the all-around player that will benefit the team in all aspects. “We want to achieve this through intelligent scouting, which not only looks at and tests sporting but also personal characteristics and abilities,” Mutschler shares. For the very young talents, under the age of 14, scouting is done in person. For the older talents that have travelled between football teams already, technology that will show a player’s statistics can be used to help find the players that will be the biggest asset to a team. “Football players will be role models. The perfect player today has to be able to represent the team well. This means that when we scout, we look at all aspects of a player. This includes family and environment-viewings and detailed personal discussions with players and parents”.

In January 2007, the VfB Youth Boarding School opened its doors. Today, 22 of the 150 school-age talents live in these rooms, very close to the prestigious Mercedes-Benz Arena. Oliver Otto runs the boarding school with three social education workers, a cook, a housekeeper and eight teachers. This provides the talents with an environment tailored to their development as athletes, students and human beings. There was an expansion of school cooperation in recent years which led to VfB renting additional accommodation near the stadium. For some players, however, family security is particularly important. Host families, therefore, represent another important form of accommodation. VfB works together with various families who live very close to club grounds and integrate players into their everyday family life. “Talents who ‘live’ with us, whether it may be in the full or part-time boarding school, are fully supported by us. This includes school, personal, and sports education training and development. For this purpose, we employ a variety of educators: social educators, team and boarding school supervisors. In addition, all coaches have a basic educator training,” Mutschler says.

The youth promotion scheme introduced in 2002 also made sure that a sufficient number of qualified staff was employed by every club. It also stated that every one of the 36 first and second division clubs has to work with local schools to ensure that the young players were receiving full support in all life aspects. “Within the framework of personality development, various social and socio-political events are visited and topics are dealt with in order to broaden the young people’s horizons and allow them to gain experience outside of competitive sports in ‘real-life’,” Mutschler says, referring to the initiatives that staff at VfB Stuttgart take to teach the young talents more than just football.

In order to ensure that all youth players receive the best possible care, VfB Stuttgart set up the VfB part-time boarding school in summer 2009. The youngsters spend the afternoon at the VfB Club Centre to do their homework and prepare for any assignments and exams. The players can also relax, listen to music, eat and drink or sleep in a specially designed relaxation room. In the 2017/2018 school year, VfB has also launched the VfB Campus together with a local school, where youth players are now taught three times a week by highly qualified teachers in the rooms provided by the football club. “Only 1.5% of all talented youngsters make it to the professional level in the Bundesliga,” Mutschler says. “This makes it all the more important for us to provide all our young people with a sound school education and to give them further training to prepare them for their future careers”.

Around 70 VfB youth players attend one of the three DFB-awarded elite schools of football in the Stuttgart area, as well as the VfB partner school, where they receive an education tailored to their training requirements. In addition, up to seven teachers are available in the part-time boarding school every working day to provide intensive support for the students. “Sports and school requirements are ideally harmonized,” Mutschler says. “In this way, we achieve 98% school-leaving qualifications with our young people, of which more than 75% have a technical college or university entrance qualification”. In 2019, VfB took their commitment to quality education for their football talents one step further and introduced the VfB Stuttgart Akademie, a university education scheme. This presents the talents with a world after school and alongside, or without, professional football. After all, it is not a given that football talents will enjoy quality university education after spending so many hours on the pitch as students.

The club attaches as much importance to the school education as to the athletic and personal development of its players. On weekends without games, young talents are allowed to go home to their families. After all, a feeling of family security and optimum support in all life aspects are the two most important building blocks of success. “The young people from our boarding school go home regularly, which is also supported financially by us. In addition, parents come regularly to training and games. Furthermore, the young people have school holidays and breaks which are adjusted to the training and games,” Mutschler says.

The move from youth to the professional team is not easy. It is a real step up, and only very few talents make it to the Bundesliga team. “In the so-called transition area [the transition between the youth academy and the professional team, usually around U19 – U21] our best young people regularly take part in training measures of the professional team. In addition, individual training measures are carried out,” Mutschler explains. On top of getting the young players to the athletic level, they also have to learn to let go of the familiar and safe environment of the youth academy. Once the professional team is reached, the talents are role models and constantly in the spotlight, and any miss-step in their lives will be analysed. To ensure that the talents do not crack under this immense new pressure, VfB ensures that psychologists and therapists are always available to the players. The players are supported by the VfB youth academy until they take that step to a professional Bundesliga team, and even then, they always have a great net of professionals to fall back on.

If you take a look at this youth academy, you can only have an inkling of how many years it took and, above all, how much money had to flow to get this level of professionalism and passion into the youth academies of the Bundesliga. It is important to recognize that over the last 18 years there have been very few issues with the clubs breaking the rules: they all stick together and want to give their young talents the very best opportunities, with or without professional football. With motivated heads like Rainer Mutschler, this programme can continue to produce great talents for many years to come who understand more than just football. The world’s major football leagues can take a leaf out of the German book and invest in their own youth academies. Money invested wisely is not wasted, and what is a more sensible investment than our youth, the future.