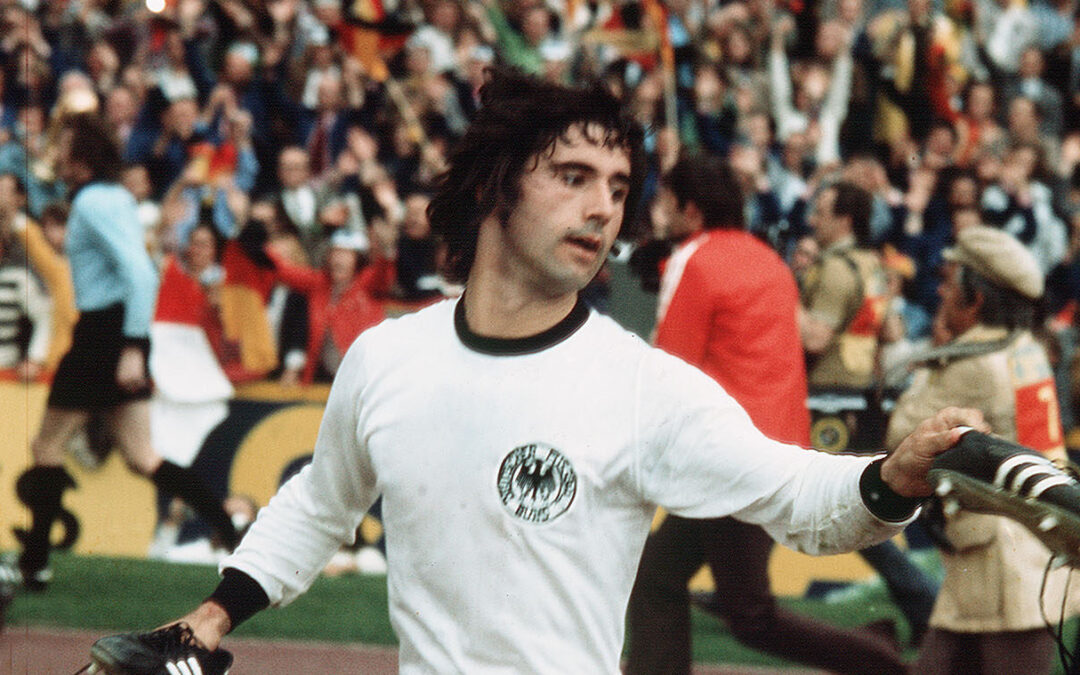 “Come on, guys, get a ticket for the final,” said Gotthilf Fischer on July 6th 1974. The next day, the Fischer choirs sang us to World Cup victory, and the Fischer choir reporter had the perfect seat: the German goals fell directly in front of me – but Bernd Hölzenbein fell the best.

There are things you never throw away for the rest of your life. On the evening of the day they became important to you, you put them in the cigar box with the immortal mementos – and dig them out again in quiet moments.

Sometimes it takes thirty years. The dusty souvenir I want to tell you about here today has suffered. The ravages of time have gnawed at it, possibly even a ravenous moth, in any case it is crumpled and appears somewhat torn at the corners. “Munich, 3 p.m., Block E 2, standing room”, it says on the card. And the date.

My standing room in Block E 2 was, to put it bluntly, a good seat. It prevented me, for example, from seeing the full impact of the first scene of the 1974 World Cup final – after all, there were about a hundred and thirty metres between me and the spot where Uli Hoeneß left his leg out against Johan Cruyff. Of course, the news of the catastrophe somehow got through quickly to Block E 2: The referee blew his whistle for a penalty, Johan Neeskens scored, the loudspeaker announced the new score, and I let my trunk hang down to my feet in my standing position. But then, at the kick-off circle, which wasn’t all that far away, I saw Müller, who voluntarily wore the unlucky number 13 on his back due to his poorly developed superstition, and with his innate beer calm, the Bomber clapped his hands and shouted that I could almost hear it all the way up in Block E 2: “Let’s go, Uli – 89 minutes to go!”

That was Gerd Müller’s one good deed on that historically valuable day. The other, forty-two minutes later, was his 2:1. After that, we were world champions – and are now celebrating the 30th anniversary, albeit somewhat more subdued than the Miracle of Bern ’54.

That was a different story, from a different time. In 1974, the first millionaires in shorts were already standing on the pitch – no more haggard war returnees balming the sore soul of a flattened nation. Back then, Herberger’s heroes would have carried the goalposts onto the pitch, strewn the lines with sawdust and blown up the ball in order to be allowed to win – they were still other heroes, and their bonuses were still refrigerators, washing machines and gift baskets of food.

To cut a long story short: The Dutch were better on that 7 July 1974 in Munich, but they had no Hölzenbein. It was probably our hook-kicking Hesse who later inspired the poet Salman Rushdie to write the wonderful lines: “Swallows in the penalty area are like a sleight of hand, but good swallows are great art. A good swallow is like a salmon that leaps up, turns and falls back into the water. A good swallow is like the swan dying.”

Bernd Hölzenbein’s against the Dutch was so perfect that, although the rascal lay down right in front of my Block E 2, I wondered for a moment whether it was a swallow at all. Many years later, on the occasion of a DFB anniversary banquet, Schalke’s Olaf Thon was standing in the toilet next to Hölzenbein at the pissing trough and suddenly said, in the middle of the mutual trickle: “Bernd, I think you can give it.” But either way, the main thing was that Paule Breitner’s penalty afterwards was in.

The Dutch, hat’s off, were great. But we had our Seppl again, as in 1954, this time not as coach but in goal, before him Berti drove the great Cruyff to madness and self-sacrifice, and Katsche Schwarzenbeck, the Kaiser’s cleaner, was constantly thrown by Franz Beckenbauer as a rock in the surf of the Dutch attacking waves. But above all, we had our “bomber of the nation”, who was in truth the nation’s dustman – his goals always came out of nowhere.

On 7 July 1974, did even one of us 80,000 in the Olympic Stadium seriously see Müller on the ball before he struck just before half-time? As a surviving eyewitness from Block E 2, I can still describe the incident at first-hand today: Bonhof goes diagonally upright in front of my eyes, drives the ball flat and blindly inside, Müller stops it with his back to goal, hopelessly so, but suddenly he puts his Swabian butt out, turns around his own butt cheek, and the rest he had already sung about on record shortly before: “Then it goes boom…”

As if unleashed, Block E 2 collectively fell into each other’s arms at this moment, and exhausted by the cruel, nerve-racking, second-half onslaught of the Dutch on the goal right in front of us, we sank to our knees at the final whistle like our bomber Müller – unfortunately, he lit a fat cigar at the banquet in the Hilton in the evening, puffed away with Breitnerpaule and declared his resignation.

Apart from that, it was a fantastic day.

If only because of the Fischer choirs, who provided the musical framework for this great match in the Olympic Stadium and whom I still can’t praise enough thirty years later – for it was the case that Gotthilf Fischer had the best idea of his life the day before the match. One Remstalian washes another’s hand, so the great choirmaster said to the little local reporter B., who was still a special reporter for his district newspaper at the time, focusing on Fischer choirs, without further ado: “Come with me, guys, we’ll get you a ticket for the final.

And then also in the corner where the goal was scored by Breitnerpaule and Bomber Müller, and Hölzenbein over the outstretched leg of Wim Janssen. At the fiftieth anniversary at the latest, I’ll get out the dusty ticket again, and the grandchildren will be flabbergasted with awe: “You were there, grandpa?”

You bet I was. Gotthilf even waived the 15 marks.