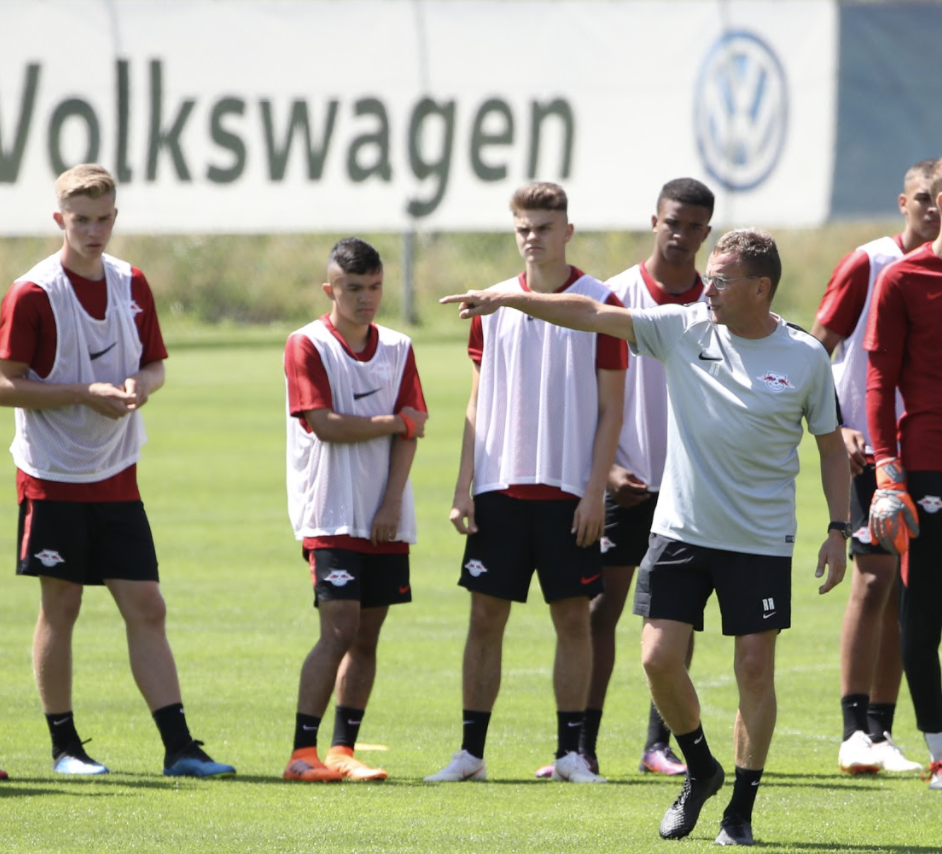 There is hardly anyone else who knows more about talent

Despite his great successes, Ralf Rangnick has never forgotten his roots. The “professor”, as many call him, was born in the small southern German town of Backnang. A man who has led a club from the lower leagues of German football to the UEFA Champions League in a very short time knows how to deal with talent. Rangnick is one of the greatest sports visionaries of our time.

“So I wouldn’t quite call them role models – I’d rather call them coaches who have accompanied and inspired me on my journey. As a coach, you have to find your own way. My coaching career started very early, actually at the age of 21, but then really at 25. I realised early on that the German football of the time was not what I had imagined and what I wanted to stand for as a coach.

That’s why, as a young coach, I had little choice but to look beyond Germany. In the 80s, there was Arrigo Sacchi with AC Milan, who already played a complete zonal marking system. That was something different from the man-marking that was typical of German football at the time. Sacchi was an important point of reference for me.

And then there was Valeri Lobanowski, the coach of Dynamo Kiev, who played against Viktoria Backnang in my hometown. Lobanowski showed what a difference it makes when a team really ‘presses’ on the pitch and how difficult that makes the game for the opponent. After that game, I watched a lot of Dynamo’s training sessions when they were at the training camp in Ruit.

In addition to these two coaches, who definitely influenced me, there is Helmut Groß, with whom I have a close friendship until this day. We worked together in Stuttgart, Hoffenheim, and at RB Leipzig.”

“The coach lets the players determine the level at which the individual components are trained and “provoked” by the rules! It is necessary and helpful for the coach to know which screws he has to turn in order to optimally develop “his” playing philosophy. He should know exactly where he wants to go and rather not intervene at all than give the wrong “instructions”! In other words, he should trust the players and their desire to play and succeed. In the background, the players can be analysed. A coach can then record certain performance indicators and follow them up if he wants to observe and promote this development.

Everything that challenges and encourages should then be brought out. This includes fun, playfulness, dynamics, passion, and the will to win. Tactics and strategy emerge along the way in the competition. The possibilities of street football can be monitored and accompanied by scientific means, up to and including AI. But it is better if the coach can trust his experience and a trained eye.

Unfortunately, such coaches who can do this are relatively rare and also only coachable with a lot of effort and patience, but every now and then there are exceptional talents who grasp things quickly and only need months for things others need years for.”

... his incredible eye for talent

“The question is how and on the basis of which factors you recognise a talent. This also includes a certain amount of experience and a trained eye. I would like to illustrate this with the example of Thomas Müller. When Müller was 16 or 17, only a few believed in his career path. But with someone like Helmut Groß or myself, who have followed the careers of young players for decades, you have a certain amount of experience to recognise whether a 16- or 17-year-old has what it takes to launch a great career later on. But you definitely need a trained eye for that. With Thomas Müller, who is not a really exceptional technically and doesn’t have fine motor skills, only certain coaches can see what strengths he brings to the table.

However, an assessment is always subjective. The scouts in the clubs have to recognise early on which positive characteristics of a talent have an effect on the team and what he can still become. First and foremost, this includes the player’s mentality. That is, as I like to say, the talent of the personality. There is always a chance for improvement here, see the example of Joshua Kimmich. Those responsible at VfB Stuttgart didn’t even want to give him a place in the squad in the second team when he was 18. That was the reason why there was even a chance for Leipzig to get Kimmich on loan for two years.”

... why talents are becoming younger and younger

“Of course there are opportunities to recognise players at 15 or 16. Mainly because players have an earlier start to their careers. It is now completely normal for a 17-year-old to play in the Bundesliga, if you think of Jude Bellingham or Giovanni Reyna at Borussia Dortmund alone. Nowadays, it’s no longer unusual for a 17-year-old to play at the top level. But you need coaches who recognise what a player can achieve and who have the courage to put a young player onto the pitch.”

... where this development comes from

“It has changed in the last 10-15 years. I remember when Mehmet Scholl was a player for Bayern Munich. He was still considered a talent at 25. You have to decide until when a player is still considered a talent. For me, a player is no longer a talent at 21. Today, a player is mature at 21. Timo Werner had already played more than 120 Bundesliga games by the time he was 21. In my opinion, a player is still a talent at 17, maybe until 19, but after that, you can no longer use the word talent. Because young players today are so well-trained by the academies that even a 17-year-old who is is fully grown physically can have all the prerequisites to be an accomplished player. If you look at Bellingham or Reyna on the pitch, you see fully professional players. These are athletes who meet all the requirements and only need coaches to develop them further and, above all, give them the chance to play regularly.

This development has already taken place in the last 10-15 years. Football has become a completely different sport. If you just look at the number of metres run, especially sprints, you can see that football has changed completely. That also means that the value of young players who have the physical prerequisites for the faster sport has been recognised. It’s no longer like it was 20 years ago, when people thought: “Oh well, he needs time now. He has to be introduced slowly. The older players have to teach him first how this works properly”. 20 years ago, a 19 or 20-year-old playing in the Bundesliga was a total exception.”

... which role the understanding of tactics plays today

“First of all, the coach needs to understand tactics. He has to decide how he wants to play. The players are fully versed in tactics as professional footballers because they have been developed at the academies. 20 years ago, nobody thought that being a professional footballer was a vacation that could be taught. That only changed thanks to the establishment of academies at the turn of the millennium.

Nowadays, no professional club can get a license without an academy that employs at least two full-time pro coaches. That’s why you can learn the profession of a professional footballer from a young age.

It is actually an absolute rarity today for a player to make a career in the Bundesliga if he hasn’t already played for one of the Bundesliga clubs at the age of 13. If you look at the 2016 German European Championship team, there was only one player who did not spend his youth in the academy of a professional club. That was Jonas Hector. This shows that the profession of professional footballers, including knowing “How do I feed myself? How do I live? What factors are important?”, has become an apprenticeship profession. That’s why a 17-year-old who has the right mentality and pays attention to everything he’s learned, is ready for Bundesliga football. Whether these young players get the chance, later on, depends on whether the coaches have the courage to let them play.

In Germany, many young players are allowed to play. It’s more difficult for young players is in Italy, where many ex-professionals are coaches. They see their youth players in the same way as they were trained back then, which is of course no longer realistic today. That’s why it’s unfortunately still rare in Italy for a 19 or 20-year-old to be a regular player. It’s mostly the smaller clubs that let the young players play. Of the top leagues in the world, Germany has the largest number of young players making their debuts and England is now catching up, especially with the foreign coaches now at the top clubs.

There is a very interesting story about this: of the eight teams in the quarter-finals of the 2018 Champions League, 180 of the 200 players were already playing exclusively men’s football at the age of 17 and were no longer in youth teams, although theoretically they would have been allowed to play for two more years in the U19s. This confirms what I said: The club must ensure that these exceptional talents can already play men’s football at the age of 17.”

“Part 2: A conversation with Ralf Rangnick” can be found here on our blog!