José Mourinho: “Have you ever had time to study philosophers?”

Are footballers more brilliant thinkers than Hegel and Sartre – or just hungry for a good omelette? Coaches like Jose Mourinho are raising the bar of high expectations.

Albert Einstein, the famous Swabian, was what the English call “the brightest bulb in the chandelier”. According to legend, the most failed man in the world went looking for an assistant one day and invited three applicants for an interview.

“What is your IQ?” he asked the first. “175,” the candidate revealed to him. “Splendid,” Einstein marvelled, “then we could philosophise together.”

“And what is your IQ?” he asked the next candidate. “120,” he replied, and the master was again deeply impressed: “Then we could go to the theatre together.”

“Do you also have an IQ?” he finally turned to the third and last. “75,” he said, to which Einstein replied, ” Doesn’t matter, then we could watch football together.”

Even if the story is not entirely true, it is at least very well invented. In any case, at some point the ghastly suspicion arose that footballers would be better off leaving the thinking to the philosophers. And indeed, for a while there was much to be said for this, because Jean-Paul Sartre, for example, said impressive things such as: “In football, everything is complicated by the presence of the opponent”. But the presence of the philosophers soon turned out to be the far bigger problem, at the latest when Sartre, in the labyrinth of his brainstorms, also drifted into the realisation: “A good goalkeeper distinguishes himself first and foremost by exceeding his powers.” What he was trying to tell us with that?

That’s why footballers now prefer to philosophise for themselves. Spontaneously, one thinks above all of national coach Jogi Löw, who as the highest authority in the country once put his foot down in front of a camera: “The philosophy of offensive play, that is, to score goals, to play forward, remains unchanged.” The “Spiegel” was speechless with enthusiasm in its online edition and raved: “The first national coach philosopher.”

But others no longer think of hiding either. When Lionel Messi briefly appeared on the transfer market the other day as a personnel matter, board boss Kalle Rummenigge justified FC Bayern’s lack of interest in the Argentine thus: “A player of this magnitude is not part of our philosophy.” The practical philosopher who teaches wisdom by example is the true philosopher.

José Mourinho, who currently coaches Tottenham Hotspurs, is also one of them. When a journalist once asked him if he still considered himself the greatest coach in the world despite his growing lack of titles, the Portuguese hit back: “Have you ever had time to study philosophers, Hegel for example?” When the reporter replied no, Mourinho confronted him with his proud life’s work as a coach, calling as a witness the Swabian thinker second only to Einstein: “Hegel says: the truth is the total.”

Philosophy is the search for answers to all the fundamental questions of the world and football. So nowadays every demanding coach pontificates at least with the sentence: “We have to create superior numbers everywhere on the pitch, that’s my philosophy.” Without such philosophies, a game is no longer even kicked off, and the whole world hangs on the lips of the associated luminaries. Even goal scorers without a high school diploma sometimes wrinkle their furrowed thinking foreheads in intellectual forward momentum and hurl the grave realisation into the microphones: “We’ve implemented the coach’s philosophy perfectly.”

Finally, someone said it.

But that was probably too much of a good thing. It’s not good when the air in the ball starts talking, say the conventional philosophers, shaking their heads, and now they are slowly but surely fighting back against the kicking masterminds. The philosophy magazine “Hohe Luft”, which brings us back to Jogi Löw for a moment, has asked the rebellious question in the direction of the national coach: “How can you scratch your balls in front of TV cameras and then also sniff your own hand?”
The headline of the thought-provoking pamphlet was “The Philosophy of Ball Scratching.”

But José Mourinho, in particular, has been on the receiving end since he described in kitchen philosophy terms that developing a football talent is comparable to making a good omelette. “Everything depends on the quality of the eggs in the supermarket,” Mourinho said, “without first-class eggs, you have a problem.” To which a critical detractor promptly asked publicly, “Is Jose a philosophical genius – or just hungry for an omelette?”

In any case, the philosophers are fed up. They are now reminding the footballers of the tried-and-tested wall slogan: “Man should leave the thinking to the horses, they have bigger heads.

Part 2: A conversation with Ralf Rangnick

Ralf Rangnick has led a club from the lower leagues of German football to the UEFA Champions League in a very short time. He knows talent.

Despite his great successes, Ralf Rangnick never forgot his roots.  The “professor” is one of the greatest sports visionaries of our time. 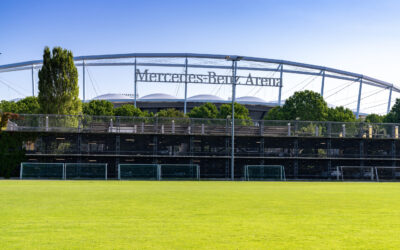